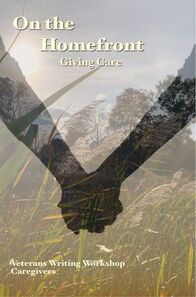 On the Homefront: Giving Care

Published in July 2021, here is the fifth anthology of writing from the Families of Veterans Writing Workshop, and the first anthology of writing specifically from caregivers. Stories about about mothers and sons, grandparents and husbands. Of childhood, marriage, childbirth, and approaching death. In the writing workshop where these stories were created, sometimes there were tears, often there was laughter, always there was a shared sense of support; giving care to one another. That care is featured in each of the stories and poems inside. 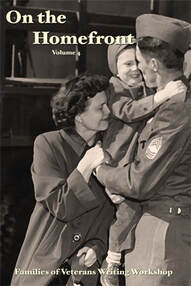 On the Homefront: Volume 4

Published June 2019, are narratives of homes lost and homes returned to, wars played out on television, wives and mothers anxiously awaiting news about their loved ones, and what it’s like when that loved one doesn’t come home. Told from a vantage most of us never have – loving someone who is literally in the line of fire – these stories are ours; mothers, daughters, sisters and wives, loving their families and holding on. 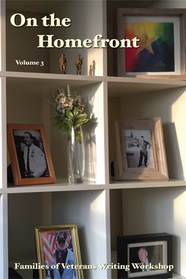 On the Homefront: Volume 3

Published April 2018, in this book you will discover the complicated lives of military spouses;  daughters looking for ways to know their deceased fathers; sons looking for signs left by World War II on their fathers; a wife learning the message in a simple piece of clothing. As we struggle to understand one another in a world that’s grown increasingly complicated and divided, thanks to the generosity of these veterans’ family members, these stories are now ours. 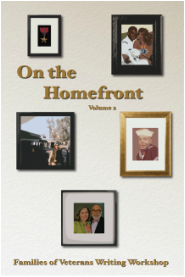 On the Homefront: Volume 2

Published January 2016, stories here include a daughter learning that her recently returned father had not served in an office but was on the front lines in Iraq; a wife watching her husband move from a reluctant reunion with his unit members from Vietnam to many reunions full of joy; a daughter sharing a moving portrait of a father in declining health; and a father dreaming the life of his unborn son. 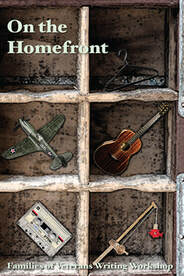 Our first anthology of Families of Veterans published September 2014.  Just as every veteran has a story, every veteran’s family member also has a story, and these stories are as unique as the individuals who tell them. The wife of an Iraq veteran sees her husband in his desert uniform for the first time. A woman searches her past to find the man behind her memories of her father who flew in WW II. Another woman who never knew her father who served in Vietnam gets to experience him through recordings of his voice.

$13 incl. shipping and handling
Powered by